The New World Centre™ is a proposal for the restoration and commemoration of the former World Trade Center site in Manhattan, New York.

The project shall once again restore the skyline of lower Manhattan with the majestic symbols of the twin towers which once stood, but in a sleek modern interpretation of Yamasaki's original architectural vision. 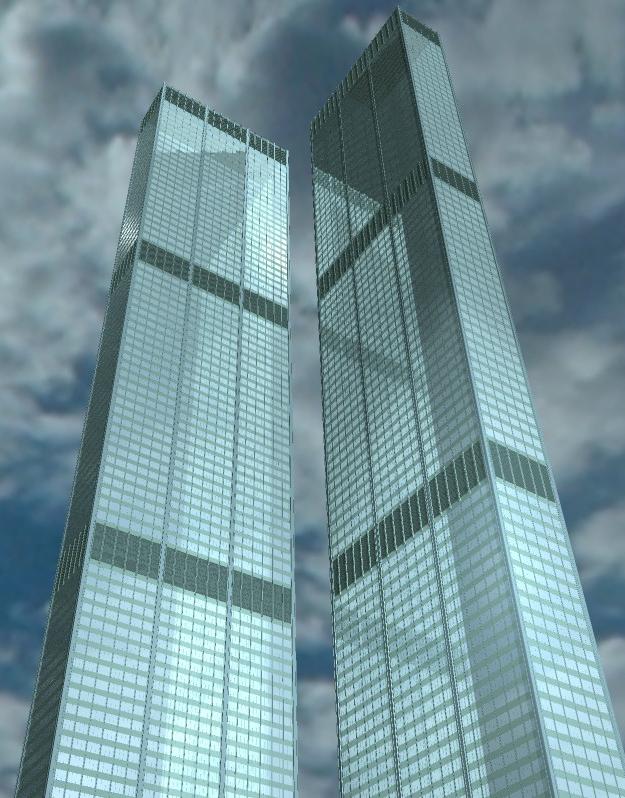 The New World Centre complex was originally conceived on September 11 of 2001 by Randall Ellison Krause. Following months of intensive research, a comprehensive design concept was formulated and refined.

The mission of the project was to uniquely dignify the original site plan and to effectively balance the new development with the surrounding cityscape while incorporating certain key elements of a memorial as recommended by the Lower Manhattan Development Corporation at the time.

By March 2003, a proposal for a vast civic center and expansive high-rise complex approached completion. Unfortunately, due to the state of affairs concerning Ground Zero by summer of 2003, including the official adoption of the Daniel Libeskind plan for redevelopment, the proposal itself was never published.

For questions or comments about this proposal, please contact Randall Krause at randall@searstower.org.

The NWC site features high-rise office space with retail and multi-use facilities at the lower levels. The complex is set within a luxuriant memorial park closely integrated with the surrounding streetscape. In addition, Courtland St, Fulton St, and Greenwhich St have been re-extended, and thus three eastern blocks opened for phased multi-use development.

Located at the main entrance to the memorial park from Vesey Street, the Unity Arch Sculpture, also known as the Heroes Arch, serves as the predominant visual gateway into the New World Centre complex via a widened pedestrian avenue.

The International Promenade, a series of walkways around which flags represent nations of the world, borders the northern reflecting pool welcoming visitors into the sanctum of the memorial park.

Immersed within the footprints of the original towers, twin reflecting pools mirror the images of the original skyscrapers with the new, producing a powerful and creative symbolism. The pools transform themselves into a veritable "looking glass" into the past.

A centerpiece of the park, memorial fountains grace the reflecting pools with colorful washes of light and dynamic water effects. The circulation of water symbolizes the ongoing cycle of life and vitality. On the dawn of September 11, both fixtures radiate beams of focused white light into the sky during a public commemoration ceremony.

Preserved by Fritz Koenig, the reknowned sculpture, The Sphere, sits upon a tiered-stone pedestal overlooking the southern reflecting pool and inviting visitors from Liberty Street.

The Wall of Hope (also known as the Memorial Foundation) stands 8 feet tall "upholding" the memorial park, as its foundation, with the names of all 3,031 victims. Nearing one half mile in length, this magnificent monument will quickly become a universal symbol of strength and solidarity of democracy.

The Wall of Hope begins at Vesey and West Streets with a plaque and commemoration statement to the victims of September 11, 2001. Other entrances educate visitors about the historic significance of September 11, transforming the wall into a living testament.

Each individual's name, date of birth, and city and country of origin is engraved in the marble-cast along a reinforced concrete barrier wall lining all sidewalks and approaches to the park. The Wall of Hope is intended to dignify the victims of September 11, 2001 in the same compelling fashion as the Vietnam Veterans' Wall in Washington, DC.

Windows on the World

The east tower includes an observatory and the west tower includes a restaurant both situated on the 103rd floor respectively. The Windows on the World will ensure public tourism remains a vital element to the new complex, and will serve as an extension of the memorial allowing visitors to view the entire site from a location that many may consider highly personal.

The west tower incoporates comprehensive broadcast facilities including a transmitter penthouse and twin communications towers for mounting of UHF and HDTV antennas. The remainder of the roof also provides ample space for placement of AM/FM antenna arrays as well as mobile telephone repeaters.

The skyscraper is designed as a bundled-tube structure consisting of of six full tubes and two half-tubes with belt-trusses at three levels for wind-sheer loading and additional support in case of localized structural failure. Cladding is brushed aluminum spandrel panels with tinted anti-glare windows on occupiable floors, louvres on mechanical floors.

Transporation is divided into three primary zones. Each zone is accessible via double deck shuttle elevators between the mezzanine to respective skylobbies. Intrazone travel is then served via single deck local elevators, half assigned to the upper zone and half assigned to the lower zone.

Lobbies are located at the periphery of the building (instead of the central core) thus providing immediate egress during an emergency should one route become inaccessible.

The NWC is to be a safety conscious design. Of prime importance is to provide reliable means of evacuation for occupants during an emergency.

Instead of a traditional centralized core which is vulnerable to a localized threat, access routes are located at peripheral corners of each tower thus providing redundant routes of egress should any one means of escape become inacessible.

Because of the use of smaller floorplates, traffic from each floor will result in less congestion. Likewise, stairwells are widened and situated along the exterior corridors of each lobby. This ensures a greater likelihood of escape and higher rate of escape for occupants of upper floors.

All lobby spaces are partitioned from the occupied portion of each floor by reinforced concrete walls. These walls extend the full perimeter of the lobby and are doubly-redundant providing extended fire and blast protection both for occupants and standpipe and ventilation conduits, and electrical and communications closets. The only access into lobbies and stairwells are through fire-rated exits at specific corridors.

The complex shall employ an integrated fire alarm, video surveillance, public address, and hot-line telephone system coordinated via a mobile emergency-rescue operations center (supplemental to the in-building security control center). All systems will be controlled via dedicated wireless and/or peer-to-peer communications network and will be capable of independent operation if necessary. Police, Fire, and EMS repeater systems will be situated throughout each building.

Protection from unauthorized vehicular encroachment is afforded by raised plaza and perimeter walls surrounding the complex. The at-grade entrance via the Greenwhich street underpass is reserved as a drop-off location for public transportation. This entrance is buffered from the roadway by concrete street barriers. All ramped plaza entrances into the park are controlled through the use of mechanical bollards and movable decorative fixtures designed to impede the intrusion of unauthorized vehicles while ensuring immediate access for emergency rescue.

Both towers are set-within the confines of either multi-story concourse wing, providing external separation from ground-level threats. CCTV cameras will be located at all pedestrian entrances to the concourse and along each side of concourse. Blast resistant windows will be installed along the ground-level facade.

The World Trade Center has become an established icon of New York City, and the twin towers themselves have been depicted in films and photographs for decades. The NWC attempts to restore this very important identity to Manhattan in its full prominence, with both a safe, habitable, economic environment that is, at its heart, a monument to a new world.

Copyright © 2003-2010, New World Centre Foundation. All Rights Reserved.
"New World Centre" and "Shaping The Future, Reflecting Our Past" are trademarks.